Calypso Editions is thrilled to announce its newest title, André Gide’s Paludes (1895), translated as Morasses by Tadzio Koelb, with an introduction by John Reed, who sees this satirical work “as a historical curiosity, an allegory of literary Paris—of nineteenth century salons and a quaintly seductive, if frequently silly and petty, vision of the arts.” By ordering Morasses now, you will be amongst the first readers to get a copy of this wonderful book. 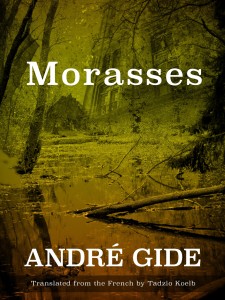 Comparing the experience of reading Morasses to “a leisurely stroll through the hall of mirrors of a writer’s mind (never was a book more aptly named),” Christopher Bram calls it “a grandparent to My Struggle by Karl Ove Knausgaard, only much funnier” while Robert Marshall writes that “discovering Gide’s Morasses is like finding that there’s one more chocolate left in the box when you thought they were all long gone.” Finally, poet and translator Idra Novey praises Tadzio Koelb for having found “a voice in English for Gide that artfully recreates the elegance of the prose in Morasses and also the humor. An assured and delightful translation.”

André Gide (1869–1951) was one of France’s most controversial and influential writers. A novelist, playwright, critic, essayist, translator, and co-founder of La Nouvelle Revue Française, he was awarded the Nobel Prize for Literature in 1947, and became the first living author to see his collected work published by the Bibliothèque de la Pléiade. Following trips to Africa and the USSR, he published anti-colonial and anti-Soviet works that earned him enemies of every political stripe. The Catholic Church placed his work on its Index of Forbidden Books shortly following his death, claiming, “He made of his sin a coefficient (and not the least) part of his fame.”

Tadzio Koelb writes fiction, poetry, and regularly reviews fiction, non-fiction, and art for a number of publications on both sides of the Atlantic, including The New York Times, The Times Literary Supplement, and The Guardian. He is deputy managing editor of The Brooklyn Quarterly and teaches creative writing at Rutgers.

Calypso Editions is proud to publish Tadzio Koelb’s masterful translation of this classic. Please pre-order two copies of Morasses today, one for yourself and one as a gift for your favorite serious reader. After you’ve read it, let us know what you think. We are here to build community, to listen to you, and to connect you with other lovers of great literature.