the vanishings & other poems 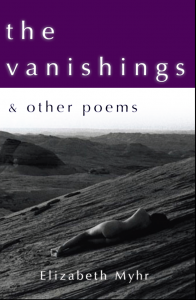 Praise for the vanishings & other poems

“Elizabeth Myhr, a veteran jazz pianist of 15 years, takes on the medium of poetry, and her poems are terribly satisfying to read. It makes sense that many years of jazz performance might help to map out a beautifully tuned poem. The themes of this collection are time and light, and Myhr explores the limits of language to express emotion and experience. Calypso Editions is a collectively run press of sophisticated poetry and fiction, and Myhr’s work is no exception. In fact, it sets the standard.”  – Hey Small Press

Books & Culture has included the vanishings as one of its three top poetry books of 2011.

“…[W]hat Myhr accomplishes, and what places this book way above and beyond any other such debut in a generation is that she is able to be a realist and to step outside of time in the same poem, often in the same line. Her work is filled with…the urgency of the late 20th/early 21st century. We recognize the landscape of the ‘exile’ which is very much of our own moment.”

“I marvel at the beauty, fragility and longing of these poems with their lost masterpieces, the house one can’t find or can’t get into, the orphans, the telephone that rings and rings. Not that the poems regret a lost love or any particular past. They knock at some door of mystery, which, because we exist in bodies, we simply can’t open. the vanishings is deeply thought provoking, untranslatable and brilliant.”

“The poems open our world to us by planting exquisite details and subverting syntax. The subversion creates apertures between fragments. The fragments are as energetic and color-saturated as van Gogh’s brush strokes. As inviting and interrupted as Eros. What isn’t apparent is always alive in its own negation, its own deep shadow. When Elizabeth Myhr calls us to join her, we’re ready to “drop every tool and run toward the vanishing.” What’s left, the palpable presence, is ourselves drawn anew.”

the vanishings & other poems was written between 2007 and 2010. Individual poems from the book have appeared in Poetry International, Floating Bridge Review, and Knock Magazine.

I am leaving the blank empty houses 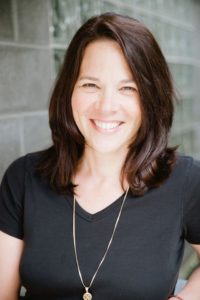 Elizabeth Myhr is a poet, editor and freelance product development manager. She holds an MFA in poetry from Seattle Pacific University and lives in Seattle with her family.

← Of Gentle Wolves: An Anthology of Romanian Poetry The Moonflower King →