Calypso Close Up: Anthony Bonds and The Moonflower King

We recently sat down with author Anthony Bonds, to talk about Anthony’s story, The Moonflower King. Here’s what he had to say.

Calypso Editions: Can you tell me a little about yourself and your background?

AB: I’m a graphic designer by trade, I currently run my own book design business, Golden Ratio Book Design. I earned my MFA in creative writing in 2009 from San Diego State University, where I met many talented writers and poets. I co-founded Calypso Editions in 2010 and designed many of the book covers!

Calypso Editions: What inspired you to write The Moonflower King?

AB: Some of the first scenes involved showcasing weird things about small Texas towns, which I find fascinating. I moved from Texas to San Diego to attend the MFA program at San Diego State University. Maybe feeling a little homesick made me want to delve into writing about Texas. The city of Vatican is an amalgamation of several Texas tows. There really is a bar called “The Place” in Anahuac, Texas, although I take great liberties with pretty much everything else. There’s a city in Texas called Carl’s Corner that is literally just a truck stop that is connected to a huge area where they sell all sorts of glorious, kitchy junk.

It started as my MFA thesis, but I was not happy with how the thesis turned out. It lacked focus and theme. So after I graduated, I kept hammering it out until the Moonflower King emerged.

I knew I wanted to touch on dreams, twins, and family with a kind of gothic sense of place. I watched a documentary on Hunter S. Thompson and learned that he made it clear to his loved ones that he would one day kill himself. I found this a fascinating idea to explore, and it wound up shaping Oscar’s character.

Calypso Editions: Ash Moone is clearly envious of his brother Oscar’s vivid dreams. He’s struggling with writing his own manuscript until Oscar starts dictating his dreams to Ash, and Ash starts to use them in his own writing. Do you see this as how writing works—you’ll always struggle until you have a source of inspiration? Or do you have a different view of how the writing process functions?

AB: I’ve always been fascinated by dreams. I love anecdotes about how great works of art come to artists in their dreams, be they novels like The Strange Case of Dr Jekyll and Mr Hyde by Robert Louis Stevenson, or songs like “If I Needed You,” by Townes Van Zandt. I also wanted to use intellectual property to help blur the line separating the brothers. Ash has writer’s block, and he is so desperate for ideas that he’s willing to steal them to write stories. But are they Ash’s stories because he fleshed them out? Or are they Oscar’s stories because the germ of the idea came from him? I like the idea of stories coming from a process of two minds. Art is communal–it gets touched by a lot of hands before it sees the light of day. That’s how fiction and poetry gets made, not by a single genius toiling in isolation, but by a process of an author gathering and writing, then passing it around to a community to give feedback and help shape the art to its final form.

In terms of inspiration, I don’t actually believe in writer’s block. Real writers and artists create on a regular basis, whether they feel like it or not. And they have a process they can trust. That’s not to say the process is devoid of inspiration. I do believe in inspiration. I tend to work with the understanding that some days will be a slog, writing-wise, and some days I’ll manage to pull the muse down from the sky. I try to plan for the former, but hope for the latter.

Calypso Editions: A major theme in The Moonflower King is closure. Ash gets closure with his family and the life he left behind, but he struggles with Oscar’s fate at the end of the book. This is Oscar’s closure, but Ash’s closure with his brother remains unknown. Do you think Ash feels something similar to peace with Oscar’s decision? Or do you think his grief and love for his brother outweighs Oscar’s decision?

AB: At the time that I wrote this, I wanted to explore the theme of generational grief. It just felt like that’s what the story demanded. Both of my parents experienced the childhood tragedy of losing a parent, so it’s something I grew up thinking about. In the years since I published this book almost ten years ago, I lost my sister, my mom, and several other relatives in my family. Looking back on the book now, it feels weirdly prescient for the course of my own life. When you lose people you love, especially family, it opens a hole in you that never really closes. Ash understood that Oscar was suicidal, but not why. By the end of the book, he has lost everyone, leaving him full of open-ended holes that he has no idea how to fill.

Lots of people tell me the book is too short, or that they wish they had a sequel to tie up loose ends. The truth is, it was originally twice as long, but due to a page count limit and my own desire to make it tighter, I chopped out a bunch of irrelevant stuff. I think the book is stronger for it. Originally, the story ended with Ash moving back to New York and getting his life back on track, but that felt totally wrong, too tidy. It occurred to me one day that one of the final scenes had to be the flashback where Ash is successful in saving Oscar so that it contrasted with Ash’s self-blame where Oscar is finally successful.

Calypso Editions: I’d love to know if you’re working on any writing at the moment, or if you have any projects in the works!

AB: I’ve been working on a YA historical fantasy adventure novel, the first of a planned series called The Book of Sand and Stars. My elevator pitch is that it’s like 20,000 Leagues Under the Sea meets Treasure Island. In space. And during the 1850’s. Basically, a misfit crew of a wooden spaceship races against the clock to track down a legendary diamond-comet. An ocean punk romp with revenge, mutiny, murder, and space whales!

Tony Bonds is a writer, graphic designer, and book production specialist in San Diego. Since 2010 he has served as the in-house book designer at Calypso Editions, a 501(c)(3) non-profit literary press based in Houston, TX. In 2012 he founded Golden Ratio Book Design, a design firm helping authors bring their books into the world. Tony earned his MFA in fiction writing at SDSU in 2009 and lives in San Diego with his wife and two small children. 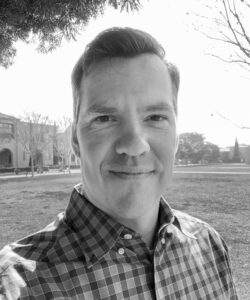 Sarah Smith is a senior Professional Writing student at York College of Pennsylvania, and a fall 2021 intern at Calypso Editions. You can find her work in the York Review, York College’s student-run literary magazine, and The Spartan, York College’s online newspaper.