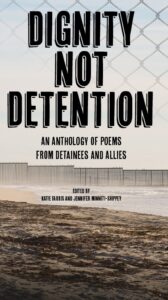 About Dignity Not Detention

This anthology is a story of collaboration: San Diego-based nonprofit Allies to End Detention worked with Poetry@Tech, Poetry International, and Calypso Editions to create the 2019 #DignityNot Detention Prize to honor refugee
and migrant voices at Otay Mesa Detention Center. The intention of the prize–and this anthology–is to give the detained poets an audience outside of detention center walls, and also connect them, in the pages of this book, with voices of poets-allies, who wrote to them from all around the world.
*
“Am I an immigrant or someone seeking justice / Am I an immigrant or a criminal. / I am confused please let me know judge:” so writes Daniel B., from Eritrea, currently detained in Otay Mesa Detention Center. Having escaped his native country under duress, he surrendered to United States authorities at the border in hope of receiving asylum. But this new life isn’t what he expected. “All I desire is to be granted a refuge,” he writes, “so I can light a candle to light my life.”

Daniel B. is one of many thousands of refugees who come to US borders with great hope, and who are met with men in uniforms who place them in dehumanizing situations and captivity.

So writes another refugee, Marlon R. S., from El Salvador. He came to the US border with great hope and instead found himself in Otay Mesa, a detention center operated by a private prison corporation, where over 900 other refugees and immigrants are held.
*
The winners, runners-up, and finalists of poet-allies outside detention include a broad range: some are widely published, and have received such prestigious honors as the Yale Younger Poets Award, the Pushcart Prize, a Poet Laureateship, and Best American Poetry anthology publications, while others have never been published before. While there was no contest entrance fee for the migrants and refugees, poets from the outside did pay a fee to enter the competition. All of the contest entrance fees were sent as donations to detainee accounts inside Otay Mesa to help with such basics as food, drink, or shoes.
*
Calypso Editions is honored to present the poems of these brave refugees and detainees alongside poets from outside detention in this new anthology, with a special afterword by Ilya Kaminsky, who judged the 2019 #DignityNotDetention prize. All poems have been translated from and into some of the languages spoken at Otay Mesa Detention Center. All proceeds from the sale of the limited print run will be donated via Allies to End Detention to detainee accounts at Otay Mesa Detention Center. Once the print run is sold through, the anthology will be made available as a free digital book through the Calypso website.

“Cataloguing poetry’s social virtues, people almost always mention the way lyric can “give voice to the voiceless.” I’ve always bristled at this—Dignity Not Detention should thoroughly disabuse all readers of the notion that any human being is, or has ever been, “voiceless.” Yes, some have had their voices violently suppressed, had myriad social and political forces move to silence their voices. But still, they had voices. Every member of our species has lived a fully unprecedented experience affording them a singular, never-to-be-repeated perspective. That is what a carceral state seeks to suppress: voices that complicate the narratives it tells of its own magnanimity. This anthology lives up to the promise of its name—the poems here dignify and illuminate the stories empire would hide away. Farris and Minniti-Shippey have assembled for us a mighty choir of voices. Listen—”
–Kaveh Akbar, author of Calling a Wolf a Wolf

“It’s an incredibly moving and humbling experience to hold in one’s hands these poems from refugees detained on US borders, to read them and read them again. I was so touched by the honesty and clarity of these voices…one wants to encourage as many poets as possible—especially those who find themselves in such a difficult situation, especially when all of it is created unjustly, by our unjust government, in our name.”
—Ilya Kaminsky, author of Deaf Republic

Am I an Immigrant

Am I an immigrant or someone seeking justice
Am I an immigrant or a criminal
I’m confused please let me know judge
I asked for refuge as a refugee
But was met with prison like a criminal
What is the point of this
I can’t find the room to all of it
I am a refugee seeking justice
I have plenty of Fear
What pushed me to leave my home country
I have many many reasons
But now I don’t want to mourn,
and I don’t want to get too stressed
I think I’ve already had enough abuse to bear from the past
I sometimes think about my circumstances
again and again
And I really don’t have anyone sticking up for my rights
My words are my witness, explaining my feelings
All I desire is for to be granted a refuge
So I can have a peace of happiness in my life
So I can find my path and sort out my life
And so I can light a candle to light my life

Translated from the Eritrean by Joel Fisaha

Translated from the English by Manuel Villalobos

Katie Farris is the author of the hybrid-form text boysgirls, (Marick Press, 2011; Tupelo Press 2019).  She is also author of the chapbooks Thirteen Intimacies (Fivehundred Places, 2017), and Mother Superior in Hell (Dancing Girl, 2019). Most recently she is winner of Fairy Tale Review’s Flash Fairy Tale Prize, the 2018 Anne Halley Poetry Prize from the Massachusetts Review, and the 2017 Orison Anthology Prize in Fiction. Her work has appeared in literary journals including Poetry, The Believer, Verse, and The Massachusetts Review. She is the co-translator of several books of poetry from the French, Chinese, and Russian, including Gossip and Metaphysics: Russian Modernist Poems and Prose. She is currently Associate Professor of Literature, Media, and Communication at Georgia Institute of Technology.

Jennifer Minniti- Shippey is the Director of Development for CIACLA, Editor at Calypso Editions, and Director of the Coyote Creek Writer’s Residency. She served as the Managing Editor of Poetry International literary journal and the Director of Poetic Youth programs in San Diego from 2009-2019. She is the author of 2018 San Diego Book Award finalist, After the Tour, from Calypso Editions; Done Dating DJs, winner of the 2009 Fool for Poetry Chapbook Competition, presented by the Munster Literature Centre; and Earth’s Horses & Boys, from Finishing Line Press. Her writing has appeared in Tupelo Quarterly, Salamander, Spillway, Cider Press Review, Tar River Poetry, and others.