Stomach of the Soul

English/Czech bilingual edition · by Sylva Fischerová · translated by the author, Stuart Friebert, and A. J. Hauner 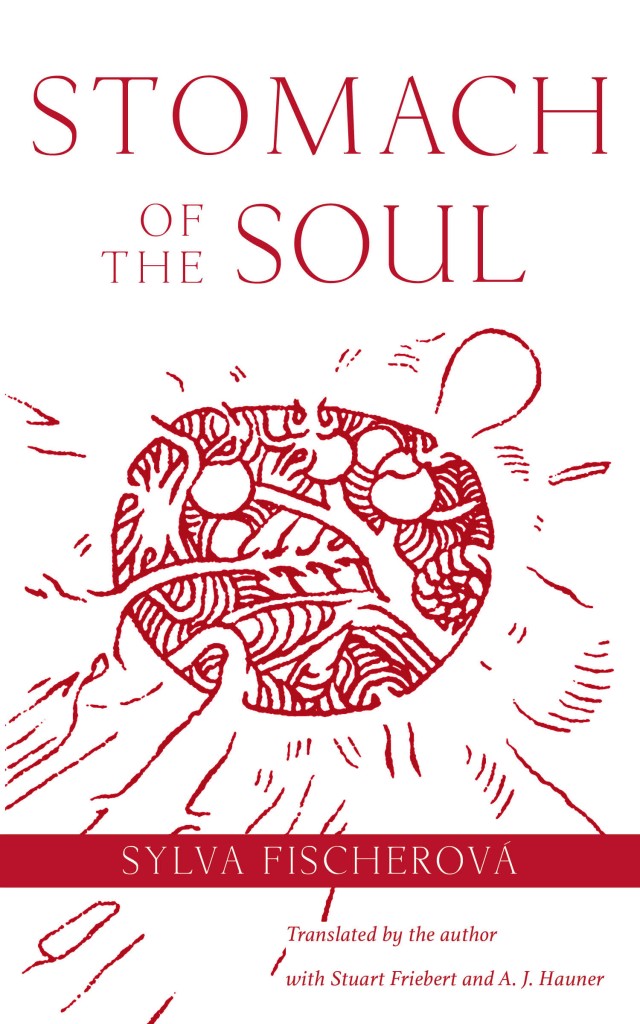 Praise for Stomach of the Soul

These new poems from Fischerová are fierce in their complete devotion to the revelation of a new way of seeing the world. They represent no less than the redefining of significant ideas such as fate, death, poetry, and even god, reshaped through the jarringly original vision of the world that drives these remarkable poems. The coming together of Fischerová and Friebert — one of our most distinguished literary translators — is great news too for the lovers of poetry among us. We used to say: These are the kinds of poems that literally transport you to other realms of seeing and feeling and knowing. Hold onto your hats.

Sylva Fischerová is a poet like no other. What does it mean? It means that here we have a poet who “lives with the dead,” who “finishes their gestures” and raves and dances and loves in a large way, with both arms open, but also whispers, conjures, casts a spell. She speaks of fate, but not : “as in Greek tragedy / where you carry it inside / where it’s wrriten in your eyes.” Her fate is “like rain: a branch fallen, / right in front of you, / pointing to the graveyard.” This is a voice that speaks without patronizing, that knows of mystery but admits that “in the last room, / the soul tied up in a password,/ which I’m not gonna tell you –”. This refusal to say, with all its warmth, with love, with verbal skill, aplomb, and fireworks of the highest order, is wisdom. She is not just one of the most important European poets alive, she is also one of the few European poets who are a great fun to read, without compromising the truth, without selling out the magic. She entertains in the old way, teaching the lesson. Her phrases utterly playful and utterly instructive: or “what the Greeks / died in admiration of, /all these are statues./ They can’t eat spinach. Can’t see/ how you, before the mirror, / try to find yourself, / the inside of your statue.” Fisherova teaches me something new each time I open her book. This is a poet to live with.

Sylva Fischerová (born 1963) is one of the most formidable Czech poets of her generation. A distinguished classicist who teaches at Charles University in Prague, she writes poetry with a vivid imagination as well as an historical reach. She has published eight volumes of poetry in Czech, and her poetry has been translated and published in numerous languages. An earlier selection of her poems, The Tremor of Racehorses, was published by Bloodaxe in 1990. She recently began to write prose, and books of her stories Zázrak /Miracle/ and Pasáž /Passage/ have appeared in the last few years, as well as two books for children and a “fictitious travelogue” Evropa je jako židle Thonet, America je pravý úhel /Europe is like a Thonet Chair, America is a Right Angle/. The Swing in the Middle of Chaos: Selected Poems, co-translated with Stuart Friebert, was published by Bloodaxe in 2010. Stomach of the Soul, a new collection of her poems in translation, translated by the author with Stuart Friebert and Andrew J. Hauner, is to be published by Calypso Editions in 2014.

← Ocosingo War Diary: Voices from Chiapas Ilona. My Life with the Bard →